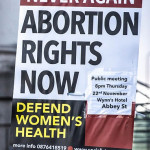 Women can legally have abortions

High Court decides that women can legally have abortions at home.
A High Court judge has ruled that women can legally have abortions at home, following allegations that the health department rushed through emergency legislation that "put women at risk" and was "misled" in doing so.
The religious lobby group Christian Concern claimed that the policy changes were not only unlawful but made without proper parliamentary security, making it unsafe for pregnant women, and that the government's decision to alter abortion policy "usurps proper parliamentary procedure".
The legal challenge was brought against the Department for Health and Social Care, over its decision in March to amend rules allowing women to have medical abortions at home following a video or phone consultation. The rules were brought in just days after the nationwide lockdown due to the coronavirus, ordered by Prime Minister Boris Johnson.
In written documents to the court, Michael Phillips, barrister for Christian Concern said the Government had failed to fully take into account factors such as the risk of a woman taking abortion drugs prescribed for another person, the risk that these drugs will be taken outside the 10-week gestation limit, the risk of women being coerced into an abortion, and the psychological and physical and risks for women.
Mr Phillips said that by allowing women to take pills at home during the Coronavirus lockdown, the 1967 Abortion Act has had a "coach and horses" driven through it.
However, Mr Justice Chamberlain and Lord Justice Singh said that the Government's decision was lawful, and rejected calls for a judicial review.