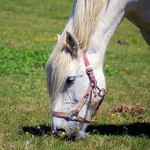 A pensioner was injured when she was attacked by a horse roaming free in a Black Country street.

The woman required hospital treatment for a broken limb following the incident which happened on Glastonbury Crescent in Bloxwich.

Local councillors say the attack is the latest in a string of issues arising from a nearby traveller site.

They say out-of-control horses are regularly allowed to roam freely around the Mossley estate, leaving many residents scared to leave their homes for fear of attack.

The matter has been reported to the RSPCA. Andy Robbins, a spokesman for the charity, said they had visited the estate and the owner of a loose horse had been traced. He added:

"The owner has been given advice by both the RSPCA and police to ensure the animal is kept in a safe environment where the horse will not be able to get loose and cause a danger to the public and itself.

"If there are any further issues concerning this or any other horse in the area then people can report them by contacting the RSPCA."

If you have suffered an injury and believe the negligence of another individual was to blame, you may be entitled to compensation. Call our team on 0121 355 4700 to find out if you have a claim.