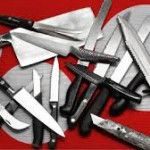 A coordinated effort by police forces to tackle knife crime has resulted in more than 2,000 arrests.
Intensified action by the 43 police forces in England and Wales to take weapons off the street, arrest habitual knife carriers, educate young people about the risks of carrying a knife and signpost them to the relevant support services, took place under the name of Operation Spectre
Officers arrested 2,005 people, with over 500 of those arrests relating specifically to knife crime, between the 9th and 15th November. Across the country, police seized 723 knives as a result of operational activity and just under 10,000 knives were handed in through surrender schemes.
Tactics included working with retailers, patrolling at transport hubs, conducting weapons sweeps, and deploying knife arches, as well as utilising stop and search powers.
Police also worked with the UK Border Force to prevent illegal knives coming into the country. During the week long operation authorities received over a thousand referrals relating to individuals attempting to import prohibited weapons. Further action relating from these referrals will continue in the weeks ahead.
The Home Secretary, Priti Patel, said: "I am determined to give the police the powers and resources they need, including 20,000 additional officers, to pursue criminals and take knives off our streets."