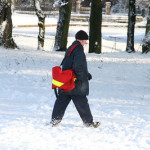 Postman who ended round at pub loses unfair dismissal case

A tribunal heard that a Royal Mail postman was sacked after he routinely drove his company vehicle after drinking alcohol.

Ian Partington, who was based at a delivery office in Newtown, South Wales, for five years until he was sacked in July 2019, admitted stopping at the pub for a pint then driving his van home twice a week after work – and was also caught with a can of lager in the vehicle. The beer can was found in his van in April 2019 as he returned the vehicle to the depot, he explained he had drunk it at home then "left in a rush and entered the van not realising he still had the can in his hand".

After Royal Mail fired him for gross misconduct, Partington, who also regularly stopped at a supermarket to buy beer on his way home, claimed his behaviour was "perfectly acceptable conduct". Partington tried to sue the firm for unfair dismissal, however, the postal worker lost his case at an employment tribunal.

Partington, who was never found to have driven over the limit, even claimed that Royal Mail's policies were 'flawed' because "individuals are technically under the influence when using hand sanitiser containing alcohol".

Employment judge Gareth Duncan dismissed his claims, telling the hearing in Cardiff: "He maintains that stopping off at the shop or pub, or drinking a can of lager before driving a van back to the office, or stopping off in that van to consume a pint of beer before travelling the rest of the route home, is perfectly acceptable conduct." The Royal Mail considers that the nature of those breaches was serious and significant. "In my view, this is a stance that they were perfectly entitled to take."