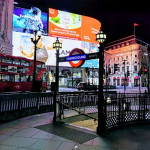 Staring at Tube travellers could earn conviction for harassment

London commuters have been warned that staring is sexual harassment, as police have told train passengers not to look at each other in an "intrusive" manner.

As part of a Transport for London (TfL) campaign against "common examples of sexual harassment" seven new posters have begun appearing in stations across the capital. These cover; catcalling, rubbing against someone on purpose, cyber-flashing, up skirting and inappropriate touching.

Also on the list is "staring" with one poster informing travellers that "intrusive staring of a sexual nature is sexual harassment and is not tolerated." Featuring emblems for the Mayor of London and British Transport Police, the poster tells Londoners to report incidents they witness to the authorities. TFL said that "the strongest possible action will always be taken."

The poster has faced criticism for potentially incriminating innocent people and being "extremely vague." 26-year-old Esther Krakue, a broadcaster from north London, said: "I saw the advert and thought it was a joke. Then I went online and saw that it was real. Staring of sexual nature... How do you even define that? How would this stand up in a court of law? It's extremely vague."

26-year-old Lois McLatchie, a communications officer for a legal advocacy organisation said that, while the campaign was "well-intentioned", police officers "have been given an impossible mind-reading task in being asked to determine whether somebody on the Tube is staring innocently or intrusively."

While several police forces include staring in their definition of sexual harassment, no successful convictions are believed to have occurred.